Congratulations To The Deacon Family – Winner Of Our MG Car Competition 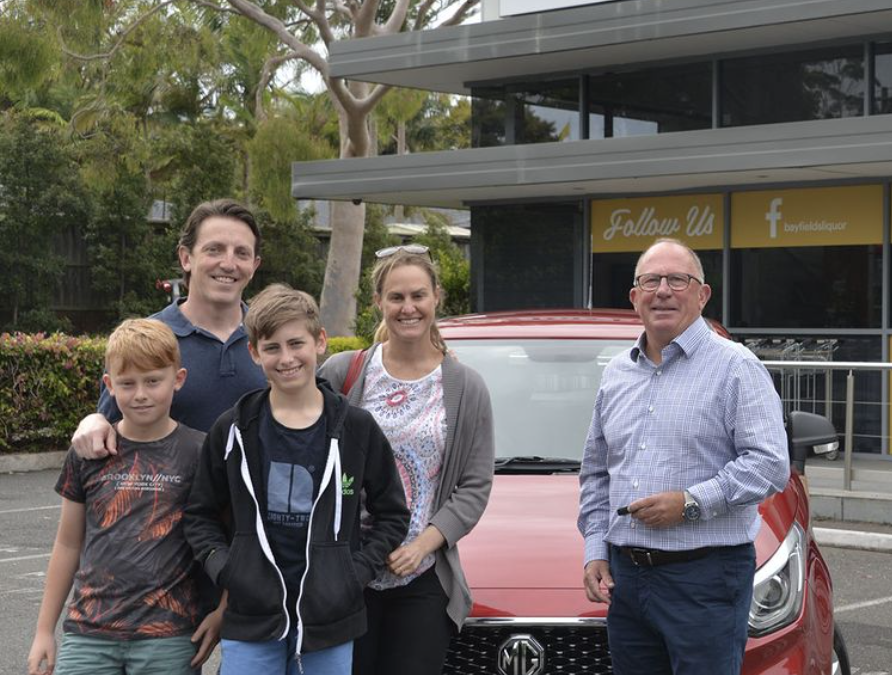 Congratulations to Mr Matt Deacon of Davidson, the winner of our Bayfield’s MG Car 2020 Giveaway Competition!

Bayfield’s has again partnered with local dealership Col Crawford of Brookvale for the second year running to offer the MG3 Core Auto Hatchback for one lucky customer through their Bayfield’s in-store and online competition.  The competition set off in mid-October 2020 and saw over 10,000 entries in total. All customers who spent $50 on premise or $150 online were eligible to apply.

With Sharon Moss of Sharon Moss Legal in attendance, the winning ticket was drawn by barrel draw at 2pm on January 12 in the office of Bayfield Hotels by CEO and owner Wayne Bayfield.

Wayne recalls “Last year was a tough year for everyone, but sharing a little joy like this today is what really makes us smile. Our locals are important to us, the fact that Matt is from Davidson and that Belrose is his local liquor store was a great result’!

The recipient of the car Mr Deacon was elated at the news. “It was the nicest call I’ve ever received! I don’t think I stopped grinning for an entire day. My family had only ever had one car, so scheduling who had the car across any given week has often been tricky. I guess that won’t be an issue any longer fortunately! “

Bayfield’s Liquor has been in operation since 1977 with superstores at Dee Why and Belrose plus it’s online store  www.bayfields.com.au which offers free local home delivery across Northern Beaches. It has long been a pillar of the peninsular and proudly boasts community minded programs including bonus pub vouchers, free local delivery and 60 minute Click & Collect options. They are also proud and staunch supports of the Warringah Rats Rugby Club and The Children’s Cancer Institute.

If you’d like to be part of our next Bayfield’s giveaway make sure to subscribe to Bayfield’s here.

We use cookies on our website to give you the most relevant experience by remembering your preferences and repeat visits. By clicking “Accept All”, you consent to the use of ALL the cookies. However, you may visit "Cookie Settings" to provide a controlled consent.
Cookie SettingsAccept All
Manage consent

This website uses cookies to improve your experience while you navigate through the website. Out of these, the cookies that are categorized as necessary are stored on your browser as they are essential for the working of basic functionalities of the website. We also use third-party cookies that help us analyze and understand how you use this website. These cookies will be stored in your browser only with your consent. You also have the option to opt-out of these cookies. But opting out of some of these cookies may affect your browsing experience.
Necessary Always Enabled
Necessary cookies are absolutely essential for the website to function properly. These cookies ensure basic functionalities and security features of the website, anonymously.
Functional
Functional cookies help to perform certain functionalities like sharing the content of the website on social media platforms, collect feedbacks, and other third-party features.
Performance
Performance cookies are used to understand and analyze the key performance indexes of the website which helps in delivering a better user experience for the visitors.
Analytics
Analytical cookies are used to understand how visitors interact with the website. These cookies help provide information on metrics the number of visitors, bounce rate, traffic source, etc.
Advertisement
Advertisement cookies are used to provide visitors with relevant ads and marketing campaigns. These cookies track visitors across websites and collect information to provide customized ads.
Others
Other uncategorized cookies are those that are being analyzed and have not been classified into a category as yet.
SAVE & ACCEPT
X Close